What A Difference A Week Makes…

(Oh man – so NOW the internet decides to work and be snappy! While trying to save the blog…it sent before I was done AND the best part was still to come!)

Jose, Malaya, & Mikela left June 1st and headed to Kansas City! The girls were invited to attend SummerFest Camp with Pleasant Valley Baptist Church. Since we had a team in the Mole – Jose flew out with them.

This is the first time we’ve had a team without Jose. Jose is a logistics expert for teams. He just knows how to make things happen. While we tend to get flustered – he’s already got plan B, C, & D.

Jose is also the best father in the world! I’m not meant to be a single mother!! Malaya, Mikela & Rosie are a huge help with their brothers/sisters, cleaning, organizing, & even helping with the teams. So I lost Jose & two of my biggest helpers –  and was left with Huey, Duey, and Louie.

Let’s just highlight a few “fun” things that happened while they were gone….

It was really hard not having him here to fix all the “little” problems that pop-up every day. His absence was felt by all. I know I’m way more vocal than he is – but he is the rock that allows us to function with excellence. 🙂

Here are a few Facebook posts from the past week….

Jody Owen Castillo
May 20 at 8:04pm ·
Malaya and Mikela are going to camp for the very first time in June. We have a team in the Mole so Jose is flying out with them.

Malaya is very organized/routined and always needs as many details as she can get. She’s really nervous about hanging-out with kids her own age. Most of the teams that come to Haiti are teenagers or older…..some much much older!! 😳

Anyways we are working on the packing list. It says she should bring a pair of sweatpants for cooler evenings.

Malaya very serious asks🤔: what are sweatpants…cuz I sweat in everything?
Me: they’re like jogging pants.
Malaya😱: well u know I don’t jog so I’m sure I don’t have any!
‪#‎missionarykid‬ ‪#‎lordhelpus‬

Mikela and Malaya are headed off to camp in Missouri! Praying this is a life-changing week for them …. and a non-dramatic one for me and the rest of the kids!

Jody Owen Castillo
June 3 at 12:52am ·
All the kids are sleeping in my room while Jose is gone. It’s a little nuts!
Don’t let this cute face fool you. She just had a diaper blowout and now she wants to play.
Gabe: Can you keep it down and turn off the light? I have school tomorrow! 🙄 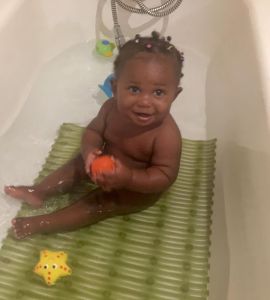 Jody Owen Castillo
June 5 ·
Asher has a big personality but he also has a big heart for Jesus that not many people get to see! I just captured this moment of him kneeling during prayer. (I know I should have my eyes closed but with three boys you have to keep tabs! 😳😊) 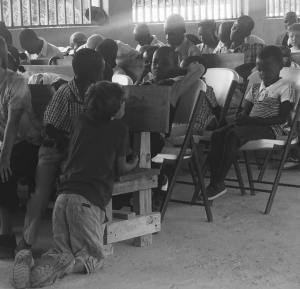 Though the road was bumpy here – it was a life-changing week for my girls!

Malaya was really nervous about going to camp and hanging out with kids her own age. Malaya was baptized in January 2015 by my mom. Though Malaya has a relationship with Christ – she’s never really had that “catalyst” moment.

I prayed for Malaya every night – in fact I didn’t sleep much the entire week. I knew how nervous she was. I loved getting updates from Marla (who invited them to camp). As pictures came in I saw all the fun sporty stuff she got to do. She was zip-lining, on a lake tubing, climbing rock walls, & playing fun new games! I knew she’d love that part of camp. She loves adventure.

But I noticed something…… something only a mother would piece together. All her pictures were of her doing activities  – while most of Mikela’s pictures were of her & all her new friends. Malaya got to meet her roommates the day before she went to camp. I looked at her smile in that picture and I examined it. I could tell she was forcing it. So I stepped up my prayers each night for her.

Before she left I hand-wrote a 4-page blessing/prayer letter that she opened the day after she arrived at camp. It was a surprise encouraged by the camp leaders. She told me she read over it many times as I prayed peace and courage over her –  among other things.

Each day at camp she got a little more comfortable. I’m so thankful she had Lindsey Harris as her team leader. Malaya told me she wouldn’t have made it without her.  Malaya has a journal full of notes from all her small groups/sessions.

She told me that one thing that really stood out to her during camp was to not to force things to happen. To not rush to make things happen but to really allow for God to work through each situation. She said she learned that you can miss opportunities by going to quickly through life.

She said she was asked whether she Embraces her sin, Abandons her sin, or Engages her sin?  If you embrace it –  you own that what you are doing is wrong. If you abandon it – you act like it doesn’t happen and you’re not doing anything wrong. If you engage it – you pray about it, repent,  and try not to do it again. Malaya said it really opened her eyes because she kind teeters between abandoning it and engaging it …. and now she is more aware of what she’s doing.

By the last day she had fully opened herself up to the Lord and felt the presence of God as she worshipped! She had her catalyst moment!

At the end of camp I got to see a picture of her and her new friend….the same friend she met the day before camp. And like any mom I compared the two smiles….and I KNEW it was real! She finally allowed herself to let go of her insecurities and embrace who she is in Christ.

For the past few months I’ve been doing the Bible Study with my girls – Follow Me by David Platt. It’s really led to a lot of great discussions about Christianity and what it means to have a relationship with Christ.

I knew Mikela wanted to have that intimate relationship but her friends here in Haiti don’t exactly believe what we do. They’re very much about the Old Testament and the legalistic/rules-side of the Bible. The part of having that deep relationship with Christ is missed on many. So I knew she was confused but whole-heartedly seeking.

My prayer for her this week was much like Malaya. I wanted her to feel the presence of God  and to be surrounded by Christians her age. I wanted her to hear from other leaders besides her family/friends. I wanted her to ask questions and seek answers. In my letter to her – I prayed for her to find clarity and understanding and that she would know how much she is loved. How worthy she is – how special and valued she is.

Mikela said she learned to be careful about who she lets in her life. That Christianity is not a religion but a relationship. To be in this world but to not be of it. To think about what you consume and the things that shape and influence your life. She learned to search the inner hearts of everyone instead of focusing on the obvious/outside.  She learned she was unique and a child of God. That she’s a lovely and PERKY queen!

She asked for God to come into her heart. She prayed for God to wash over her mind and heart with His words. And the last day of camp Jose, Malaya, her new friends, and wonderful staff –  watched her take that next step and get baptized!

It’s funny what a difference a week can make. Many of the same things my girls experienced at camp – are the very things our travelers offer to this community when they come.

Americans go home and often wonder – did I make a difference?  Did my presence here matter?  I was only here for a week.

Well….if you can “take home” one important thing from this blog –  PLEASE don’t ever doubt – – that lives can completely and forever be changed –  in just ONE week. 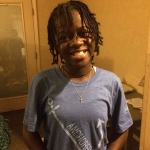